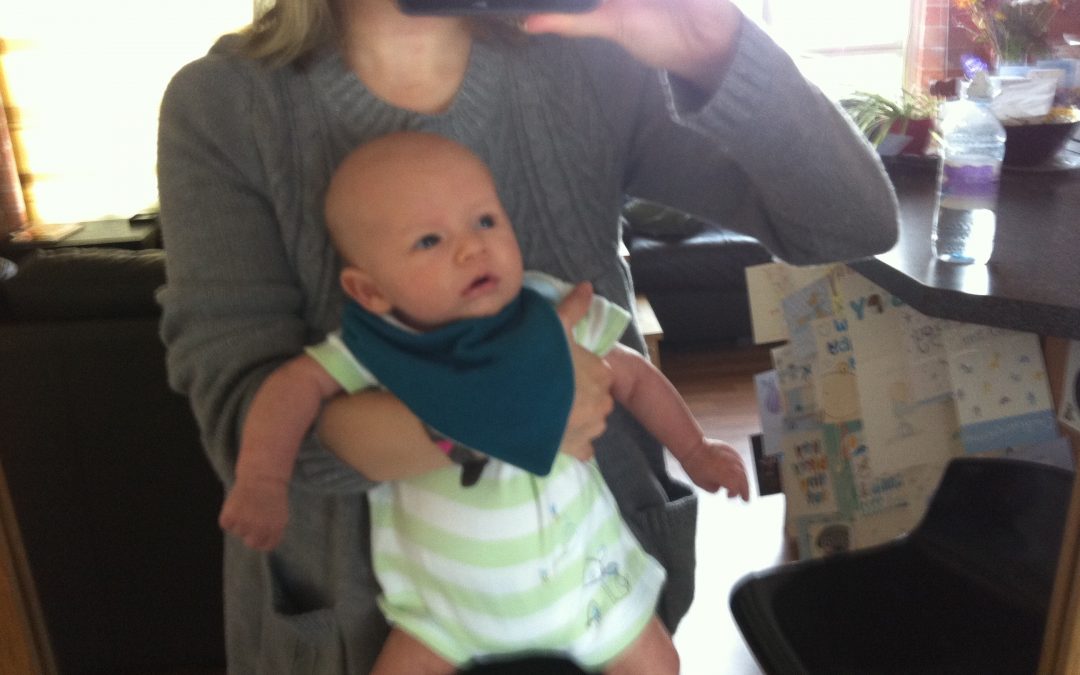 I have a healthy newborn baby, hurray! Here is my newborn story!

Even though I had nine months to prepare, had read extensively about caring for newborns and had plenty of previous knowledge from my women’s health physiotherapy work… I was so not ready. 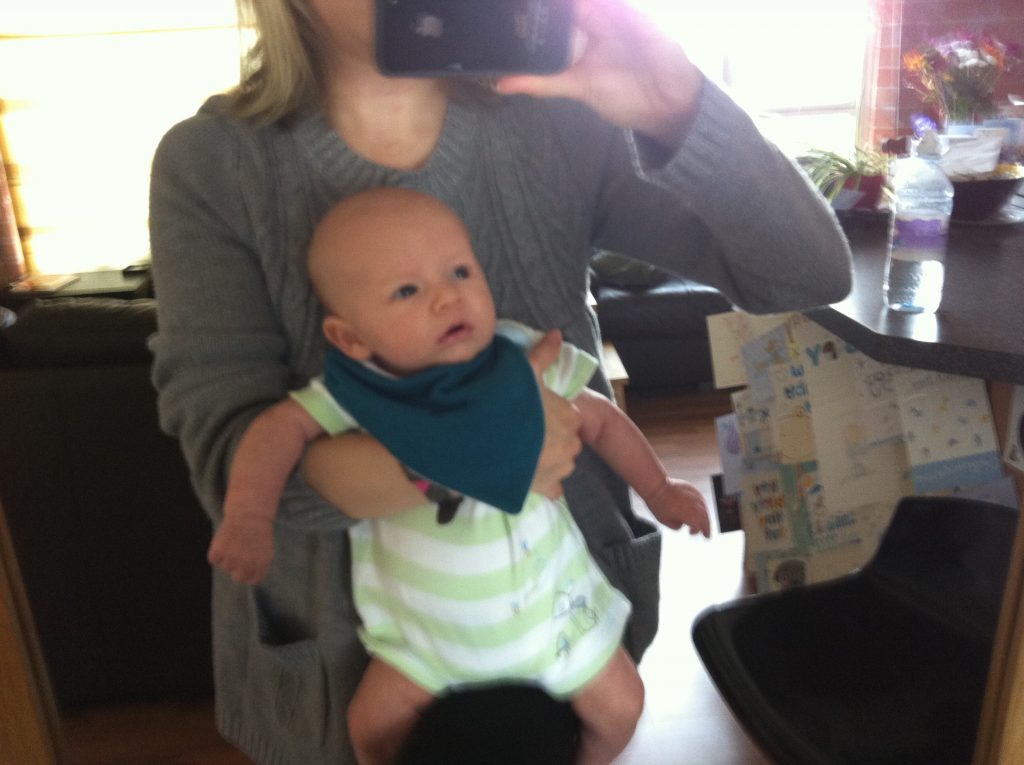 They say sleep when the baby sleeps. My newborn slept a maximum of five hours in a row but naps were so randomly placed throughout the day I didn’t know if it would be a one, three or five hour nap! I didn’t sleep when he did. I should have done. Instead I finished off my scrapbook (obviously so important) and wrote thank you notes. I fed, watered and entertained guests at any time they felt it convenient to call in.

The first two weeks didn’t seem too bad. My husband was home and I remember thinking I was lucky to have a baby that slept relatively well. I was up 2-3 times a night but I didn’t mind, I always got up out of bed and took my little one next door to feed so as not to disrupt my husband. In hindsight, I really shouldn’t have. I didn’t do much to make life easier on myself. I always put the needs of others first.

I clearly remember the first day my husband went back to work and I had to look after my little newborn on my own. I had a midwife appointment at 2pm,  I still couldn’t drive following my elective Caesarian section so I had to walk. Luckily the health centre wasn’t far from my house.

Hours blur into insignificance with a newborn and I remember I made my appointment (just) but had not eaten, so I sat there in the waiting room with a packed up sandwich, trying to eat or rather inhale it.

I was discharged from the midwife at two weeks. I had one visit from the health visitor at home and then I had to access the services in the health centre. By week three I was struggling. My newborn developed colic and I will never forget what that baby cry sounds like. It’s awful. He had colic from three weeks until about seven months old. He liked to be held facing outward with his legs down and hated being cradled lying down. My arms and upper back grew very sore very quickly.

I remember ringing the out-of-hours midwife one night when I was really struggling to feed, and a man answered. I have nothing against male health care professionals, but at that point I just wanted to speak to a woman, preferably one that had children and who would understand and relate to me. I was given clinical advice that didn’t help the hysteria building up inside me as well as my newborn child.

I tried Infacol, I tried Gaviscon as prescribed by the GP, but as my little one was being breast fed I struggled to get him to take it. I tried a homeopathic remedy that cost a small fortune but I carried on with it regardless, as I thought it made a tiny difference if he didn’t have it. I don’t think I tried gripe water but I’m pretty sure I tried everything else.

I struggled to feed naturally and I didn’t particularly enjoy it if I’m honest. By 5pm my breasts were sore and my newborn always became upset and difficult to soothe. 5-6pm was the witching hour. My husband had a new boss at work and started coming home later and later. He was tired, I was grumpy and we were both becoming very sleep deprived.

I became what felt like a single parent. I take my hat off to any single parents as having a newborn is one of the hardest things I have ever had to endure, mentally and physically. I remember being pleased with myself when I had got my little one to bed and sat down to eat by 9pm. Then maybe I would get some chores done before he woke at 10/11pm for his next feed.

To say I was exhausted is an understatement.

Two – three months in I was a sleep deprived, exhausted wreck. I went out to meet friends, just to get adult conversation but found these outings so tiring. Everyone else seemed to be doing ok, so I would pretend I was fine and everything was normal. My little one was never content, probably because he was picking up on the nervous tension that I’d developed by then. He had three 20 minute naps throughout the day but never slept for longer. Most of my friends little ones all managed 2-3 hour naps in the afternoon. I kept asking myself: what am I doing wrong?

He would nap in his pram for up to an hour at a time if I walked, so I walked. I was exhausted but I still walked for up to an hour 2-3 times a day. I found comfort in silly things like noticing that almost everyone out walking in the early morning either has a dog or a pram. Something I was blissfully unaware of until I had my baby.

In some respects, walking was my savior, but being so tired I also resented doing it at times, especially in the rain. I just wanted to sleep. However, like most women, instead of napping when my little one did I would wash, clean or do jobs around the house without a rest.

I didn’t do what worked best for me and my newborn baby. To be honest I had no grasp of what that even was. I tried a sling to see if that helped. It did a little but as I’m so small I couldn’t manage it for long periods.

My little boy piled on weight. I was immensely proud but the feeding, carrying and lifting really took its toll on my upper back which got extremely sore. It got so bad I knew I needed to do some movement exercises to reduce the stiffness. So, when he slept I started to do some stretches and slowly this eased things a little.

I remember he became even grouchier around the three month mark. I wasn’t sure why at the time, but then at four months old out popped two teeth. Feeding got interesting for a while but then became ok again, until he got his two top teeth. I managed to breast feed him exclusively up until five months and then I did a mixture until seven months. I stopped completely after he bit me during feeding and I was bleeding out from my areola. Enough was enough.

Things became easier from then. My little one had started weaning and with food, his colic finally eased. He started sleeping through the night and eventually, so did I. A full night’s sleep made such a difference to me. We used controlled crying to get him to sleep. It took one or two awful nights but then he slept through. It wasn’t pleasant but if I had known that it would work, I would have done it a lot sooner. I don’t regret it. I was broken. 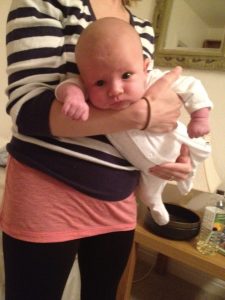 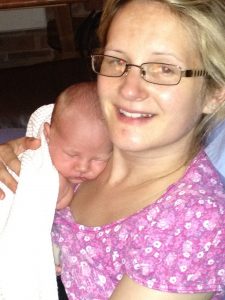 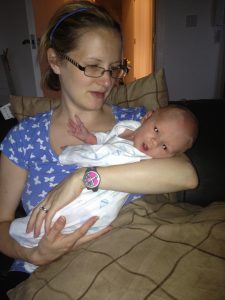 As I write this, my little one is three and I have no desire to have any more at this stage. I can just about manage the demands of one little person, the thought of two terrifies me. It also fills me with dread in case I end up in the same sleep deprived state as last time. So for now, I am content with my little boy. He brings me a lot of grief but also so much joy. Without him, my days feel empty.

If you can relate to anything I’ve written or have your own newborn stories to tell, I would love to hear about it below.

In the next blog I will be explaining the importance of moving when you become stiff and sore from sustained postures like feeding or carrying baby a lot. Keep your eyes peeled in a fortnight!