This is my personal pregnancy story, raw and from the heart.

It’s not full of roses I’m afraid… I certainly did not ‘glow’ at any stage.

My hairdresser once advised me that after doing the deed you should put your legs up the wall and stay in this inverted posture to guarantee you become pregnant…. I have practiced a lot of yoga throughout my life and funnily enough this posture – known as the ‘L shape’ – is a great energy booster. It’s a relaxing posture that you should practice if you’ve had a busy day at work.

I knew straight away that I was pregnant. I did follow the legs up the wall advice although I’m not sure if that should get the credit here! After having a positive pregnancy test I felt a bubbling excitement inside. I wanted to shout out the news from the rooftops but, of course I couldn’t for at least another ten weeks.  I felt like I was walking round with a huge tattoo on my forehead saying ‘I’m pregnant’. My midwife and 12 week ultrasound scan could not come soon enough.

Going for my 12 week scan was both terrifying and joyful all at once. I was scared I might see someone from work as I worked at the hospital and had just spent nine months working on the women’s health wards. I was also apprehensive and worried in case something might be wrong – I’m a natural born worrier. So my husband and I were delighted when everything was ok. We got some brilliant pictures of our ‘little one’ that on reflection don’t actually look like a baby at all. But off I went, putting pictures in my pregnancy scrapbook and doing a monthly account of my growing tummy.

I was a bit gutted that we were told our due date would be a week later than we had originally thought – could this pregnancy get any longer? It also meant I was due two days before my own birthday which, I’m honest, I wasn’t keen to share. 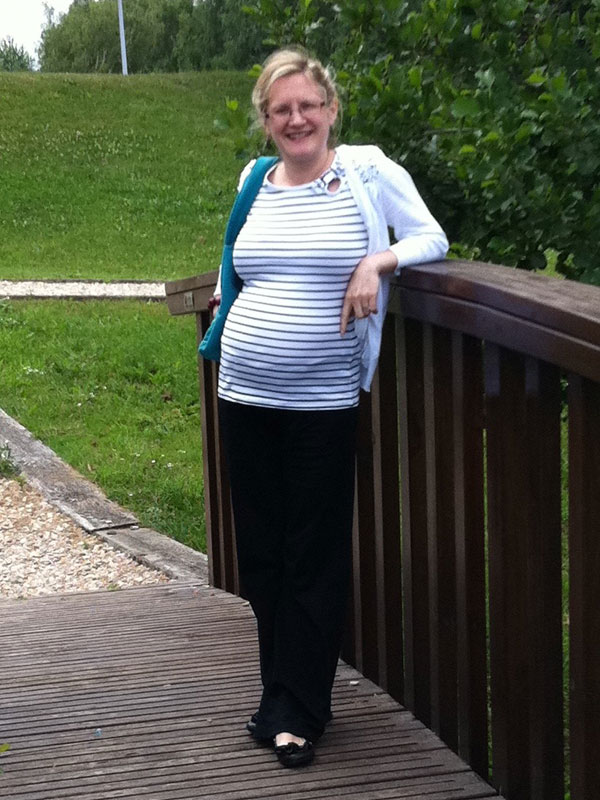 I could not stand the smell of cooked food, especially meat or fish. I was also working on elective orthopaedics at the time so it was a heavy job lifting hip and knee replacement limbs. I had to swiftly exit the ward at lunch time as the smell of the food made me want to wretch. My sense of smell was extremely heightened and to be honest I didn’t enjoy it, I wouldn’t envy being a dog for that reason. I didn’t crave any foods particularly but I would fight off anyone trying to steal my salt and vinegar crisps at lunch times.

I was fine though and determined being pregnant would not stop me exercising. I went skiing at 15 weeks to Avoriaz which was a beautiful ski resort. I fell over twice and during one fall landed hard on my bottom. I was convinced I had damaged my coccyx – something you don’t want to do in pregnancy. Take heed though ladies; do not go skiing whilst pregnant if you are a beginner. I only skied in the mornings then had nice relaxing baths and read books in the afternoons and I was a pretty good skier before becoming pregnant.

I used to cycle to work religiously. It gave me some exercise and much needed headspace after a busy day on a demanding hospital ward. But by 19 weeks I found cycling hard. The wind was stronger than I had ever experienced; I found myself struggling to pedal and felt out of breath, so I reluctantly started to get the bus.

At 20 weeks we had our next scan, little one was hiding deep in my pelvis and they couldn’t see him. I remember being tipped upside down practically and nearly falling head first off the couch! I was clinging on for dear life with my hands but out he came and we got the best alien picture ever seen. It was at this point the ultrasound lady went to get a colleague to check something. I knew that this was probably not the norm here and started to worry.

I was told I had placenta praevia. I was mortified and very upset. I thought I had caused it by doing deep squats on the ortho ward and too much heavy lifting of limbs in and out of bed. I went straight back to work and cried on the women’s health physio who reassured me I hadn’t caused it at all. If you have never heard of this or are not sure what it is, I explain it all in my blog post: Placenta Praevia

I became consultant led, something I wasn’t too happy about as I was very head strong and wanted a natural birth in a pool with no drugs. I had just completed my hypnobirthing course and was raring to go with the opportunity to try it all out, get in the zone and let my body do what it was made for. I also attended a yoga class once a week led by a doula, who was my only sanctuary and form of exercise from this point onwards. It was a mixture of yoga and Pilates moves and I absolutely loved it. I met my support group of other mums to be here and we still meet up now. They were my rock postnatally and I am very grateful I met them the way I did.

During the next couple of weeks I had some scary fainting episodes. One was outside in the street and one was in the lift of our apartment buildings. I went from feeling perfectly normal to weak and short of breath on exertion in practically a day. Walking up the stairs became too much, I had to take the lift. I had to walk at a snail’s pace otherwise I felt really dizzy and short of breath. I felt like an old person in a young person’s body. In reality what was happening was that my little parasite was healthily gaining weight and growing like a good foetus should and me and my tiny frame were being drained.

And that is what the second half of my pregnancy felt like to me… I was an OAP. But, I knew that after having baby, normality would be restored, so I always had hope.

Shortly after my placenta praevia revelation, my midwife, who was brilliant, told me that little one was breech. He stayed this way from 20 weeks until he was born. This made me even more consultant led; I felt like I was starting to lose control.

I tried moxibustion acupuncture to get little one to turn. I religiously followed the advice from the spinning babies website that encourages you to hang off your bed with your knees up on the bed and your arms in a head stand position. And yes it does make you a tad dizzy.

I had further scans at 34 & 36 weeks. The first to see if my placenta had moved up (and hooray for me it had) and the second was to see if little one was still breech, which he was… groan.

I was told at that point I would be booked in for an ECV by a junior doctor to which I insisted that no I wouldn’t as I didn’t believe the evidence was strong enough to warrant having the procedure (an ECV is an External Cephalic Version. It is where doctors try to lift baby out of your pelvis and turn them from feet down to head down position).

I then got to see the consultant at my next appointment which was like a breath of fresh air. She accepted my decision to not want an ECV and gave me advice about alternative therapies. She also scared the living day lights out of me by statistically quoting facts about how breech babies are born and how if they get stuck they have six minutes to get them out pronto. I was told if I wanted a vaginal birth it would be in stirrups with forceps – er, no thanks to that option. So I went for the elective, planned Caesarean section.

I cried in the bath that night. I grieved that I would not get the opportunity to try and give birth naturally. My hormones were running wild in my third trimester and I felt like I was riding a rollercoaster of emotion.

My consultant did tell me to try reflexology as her sister’s baby was breech up until 38 weeks and it turned successfully with that. So off I went and paid for a pregnancy reflexology session. It was amazing and I would highly recommend it to anyone. I felt little one try and turn but he simply couldn’t and I went out of there knowing I had made the right decision to have the C-section. I felt lighter, like a burden had lifted.

So I chose my child’s birth date which felt a little bit odd (my husband couldn’t make that ante-natal appointment). I chose not to have him on my wedding anniversary but opted for two days after which was actually my parents wedding anniversary date (who were now divorced). My mother wasn’t best pleased but she got over it, bless her.

And so from there I walked into hospital at 39 weeks pregnant reading 50 shades of grey hilariously. I went down for an ultrasound scan to confirm little one was yes indeed still breech and walked into theatre for my planned C-section.

Does any of the above resonate with you? I’d love to hear your pregnancy stories if you would like to share them below please do.

If you liked reading this keep a look out for my birth story in my next blog.